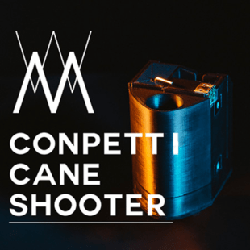 The Confetti Cane Shooter by Jik allows you to produce an appearing cane with a huge burst of confetti, ANYTIME…ANYWHERE with its wireless remote system.

The Confetti Cane Shooter by Jik is one of the most effective and easy to set up confetti shooters. You can control where the confetti shoots with the adjustable angle. And with its compact size, you can hide it easily.

Also, it is very reliable due to its battery power indicator and built in plasma arc igniter. Charge on-the-go with the Android charging port.

Take your performances to the next level.