A FEW GOOD CARDS BY ALDO COLOMBINI ON DVD

Packet Tricks are always popular. Using only a few cards you can perform very strong, baffling, visual magic. Here you have ten packet tricks form the world’s top ‘packet trick’ experts. Japanese Aces (Shigeo Futagawa): A real fooler where you and the spectator mix the Aces three times (the last one face up and face… 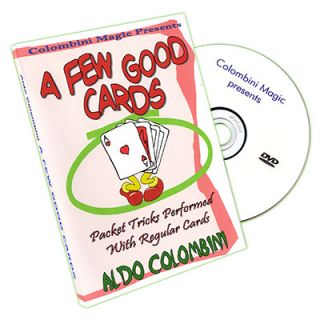 A FEW GOOD CARDS BY ALDO COLOMBINI ON DVD

Japanese Aces (Shigeo Futagawa): A real fooler where you and the spectator mix the Aces three times (the last one face up and face down) but the Aces always separate!

An Ambitious Classic (Larry Jennings): The A, 2, 3, 4, and 5 of Clubs perform an ambitious routine moving from top to bottom, from bottom to top, they turn over and at the end the 5C becomes the 5H! It will become one of your favorite routines!

Wild, Wild Best (Aldo Colombini): Eight red cards and two black cards. All the cards become black. Then four are back to red and the other four changes into Aces!

Total Magic (Peter Duffie): Peter at his best! Ten cards from Ace to Ten. The cards have different numbers on their back. With this you will perform one of the most baffling routines ever!

Twister (Sam Schwartz): Presentation by Karl Fulves. You show any four of a kind and a spectator FREELY selects a suit. This card is the only one with a different colored back!

Dazzler Strickes Back (Paul Gordon): Great for trade shows too. Four cards (say Queens) find three selected cards and at the end their backs change color (any message can appear on the cards!)

Red Oil, Blue Water (Peter Kane): An oil and water routine with a difference. The red cards have red backs and the black cards have blue cards. Yet, the cards mix and un-mix in a three-phase killer routine!

Spectator Cheats (Reinhard Muller): The four Aces are mixed with other cards by a spectator; some cards face up, some face down. At the end the Aces are seen to be the only reversed cards in the packet!