A legendary figure in magic – the inventor of Matrix and many other singular creations – teaches you not only how to do a magic – but how to be a magician! Al Schneider has spent his life not only studying magic but analyzing what makes magic effective for an audience and you’ll see the… 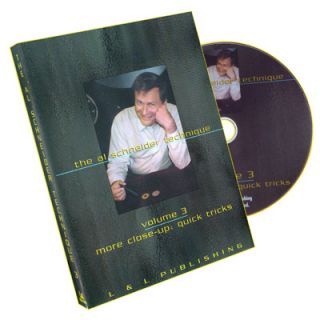 A legendary figure in magic – the inventor of Matrix and many other singular creations – teaches you not only how to do a magic – but how to be a magician! Al Schneider has spent his life not only studying magic but analyzing what makes magic effective for an audience and you’ll see the amazing results on this remarkable DVD series.

In this third volume of his landmark video series, Al Schneider demonstrates and teaches a wide variety of professional-level close-up material that is sure to become a staple in your own act. Give any of these honed performance pieces the attention they deserve and you’ll be performing world-class close-up magic in no time.

COIN THRU RING – A coin placed under a hank is trapped when a ring is threaded over all corners. Then the coin melts through the ring to escape.

RING AND PENCIL – Another classic of magic improved by the Schneider touch! A ring is placed onto a pencil and though the spectator holds both ends, the ring vanishes and is found on the performer’s finger. Another any time, any place miracle!

SPLIT SILVER – A cute quickie! A silver dollar is shown, covered for an instant and it splits into two half-dollars. The two halves are then tossed into the performer’s hand and squeezed back into a silver dollar again. A great walk-around trick!

CONE AND COIN – This is a feature item as two coins, one under a cone and the other in the performer’s hand, change places under impossible conditions. It looks like real magic!

CUPS AND BALLS – A five-phase routine that has been audience-tested by several noted performers for over 20 years. Each phase has been fine-tuned to elicit a different reaction from an audience and when they’re combined, it becomes a powerful Schneider-enhanced version of a magic classic.
stunner!

MARKED DECK – A deck of cards with smudges on its sides is shown. A card is selected and the deck is cut. The smudges are now shown to display the name of the card. Very perplexing – and easy to do!

CARD TO ENVELOPE – An envelope is in open view. A card is selected, marked and returned to the middle of the deck. The performer then opens the envelope and removes – another, smaller envelope! And, yes, the selected, signed card is removed from that envelope!

VANISHING DIME – A simple yet impossible feat! A dime is pushed into a closed fist. The performer uses a pencil as a magic wand and taps the closed hand which is opened to show that the coin has completely vanished. Both hands are shown empty and the best part is that when your spectators want to see it again, you can do it again!

RING GAG – The performer asks a spectator to take note of a ring displayed on his open hand. The hand is closed and the spectator is asked to describe the ring. The performer opens his hand to show that the ring has vanished, only to be found on

UNIVERSAL CARD – Three cards are selected and an odd-backed card – the Universal Card – changes into each selection after coming into contact with it. Another classic of magic improved by the Schneider touch!

COPPER/SILVER TRANSPOSITION – An oriental coin is placed under a handkerchief and given to a spectator to hold as the performer displays a silver coin at his fingertips. The silver coin is covered for an instant and instantly transformed into the oriental coin. The spectator looks at the coin in the hank, only to discover that they’re now holding the silver coin.

CARD PALM TRANSPO – Two cards are shown and tabled. The performer then displays a face card on top of the deck and covers it with his hand. The card is apparently lifted from the deck as if it were palmed, but the hand is squeezed and then opened to show that the card has vanished. The two cards on the table are spread to show that the vanished card has appeared in between them.