Stone Cold Mental Volume I In this series I’ll share with you my personal collection of mentalism I’ve built up over the past decade and a half or so. The 13 items to follow are just a small sample of what’s to come. All of this material has never been published anywhere prior to this… 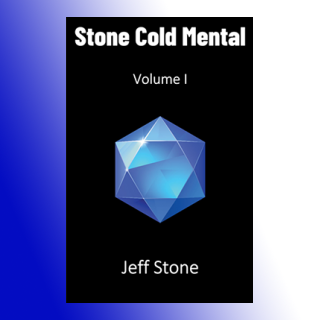 In this series I’ll share with you my personal collection of mentalism I’ve built up over the past decade and a half or so.

The 13 items to follow are just a small sample of what’s to come. All of this material has never been published anywhere prior to this series.

In this first volume, you’ll find ten effects in a few different categories, namely ESP, tarot, “time”, bizarre, and “luck”. Plus 3 bonus ideas including an effect specifically for magicians as well as a utility idea, and a fun presentational idea for your stand up/stage show.

Also included you’ll find 8 QR Codes with links to video footage, a secret website, and a whole bunch of other stuff!

Step inside and join me on the journey to de-boring-ify your mentalism. Why be boring when you can be Stone Cold Mental!

Inevitability – A prediction is openly placed on the table. The spectator truly shuffles a packet of ESP cards then (without the mentalist ever touching the packet) deals them out on to the table stopping whenever they want. The prediction, of course, is correct. The spectator’s choice is truly a free choice.

Torched Tarot – What follows is a very powerful moment of wonder. This will be a true connecting moment with your “spectator.” The fact is, that this is more meant for a private one-on-one meeting with the spectator as a “sitter” and you as a “reader.” This truly is very scary-powerful. Please, please, use it wisely and responsibly.

Nightmarot – The haruspex predicts a thought of tarot card in just about the creepiest way possible. Don’t worry, no entrails or sacrificed animals were involved.

The Persistence of Time – One spectator reveals the merely thought of hour of another spectator.

Time Enough at Last – This effect is the same as the preceding effect. However, rather than drawings of clocks, actual watches are used, and the presentation is quite a bit different and has an overall different kind of vibe.

Hotel Hell – The key to the hotel room of a serial killer is shown to have a spiritual connection to the murderer causing a fireball to appear from nowhere, and other super creepy things.

The Purge – A voodoo doll wrapped in a cloth is seen to move. Then a pin appears in the voodoo doll at the exact place chosen by the spectator.

Bone Count – A spectator secretly chooses a number on a die. Another spectator chooses 1 of 6 facedown cards (i.e., one for each number on a die). The card chosen matches the number on the die. As a kicker, the other cards are shown to be completely blank. No equivoque.

LOST Lottery – The mental mind manipulator is able to hear the thoughts of the piqued participants as they think of some lottery numbers.

“I really admire Jeff Stone’s approach to mentalism. His effects are not only especially powerful, but also clear and undeniable. And his presentations [in Stone Cold Mental] provide strong theatrical themes, while leaving plenty of room for the reader to bring their own unique style. You’re in for a real treat.” – Jay Sankey

“Stone Cold Mental has solid usable effects for stage and close up. I’ll be using the effects, and I predict you will too.” – Joe Diamond