BY JOAO MIRANDA The Watch is the final answer to the classic watch prediction effect, where the magician correctly predicts any named hour and minute, freely chosen by the spectator. João Miranda and his team created the holy grail, where there are absolutely no assistants or stooges needed, and with a diabolical method that allows… 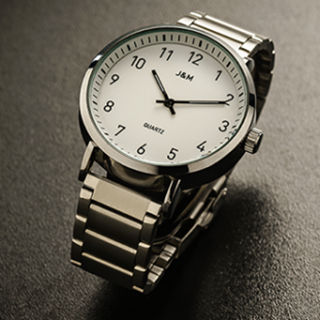 The Watch is the final answer to the classic watch prediction effect, where the magician correctly predicts any named hour and minute, freely chosen by the spectator.

João Miranda and his team created the holy grail, where there are absolutely no assistants or stooges needed, and with a diabolical method that allows the performer to invisibly input any hour and minute, in less than 3 seconds and with absolute accuracy.

By the simple action of going to the pocket to grab any object, the time input is accomplished.

Take a look at the following features…

Besides all the above features, 4 original effects are fully explained.

The Watch is a patent pending product (in both design and utility) in over 75 countries, including China and the United States of America.

TV rights are included with the purchase BUT the buyer must give previous knowledge written by e-mail to João Miranda Magic, at least 5 days before the TV recording.

Yes. You can use The Watch as your everyday watch for over 2 weeks with one single charge!

2 – What is the difference of The Watch when compared to other similar devices?

First it uses a keypad that makes it super easy to perform without the help of any assistants. Also, when the magician inputs the information on the remote the signal is sent every second until the watch hands move! This is a first on any electronic magic product making of The Watch the most reliable on the market.

3 – Does the magician needs to look at the remote?

No! The magician can easily feel the buttons in his pocket thru the fabric and press the buttons directly without hesitation. You will be doing it after right away once you try it out.

4 – How does the magician know the remote orientation in his pocket?

The button “0” was strategically placed isolated and bellow the other buttons. This is fantastic because the magician knows instantly that he is holding the remote in the correct position.

It is a special mode that allows the magician to be hands free if he wished to make a reveal. Example: the spectator says the hour 5.30, which you input in the remote. Then only 15 seconds later the watch hands will move. So, you can show them the wrong hour (the spectator will think the magician failed the trick) but then you pass your hand over the watch and the time is now correct! This is great for reveals if you want a more “magical transformation” of one time into another. In this mode at the 13 second mark the remote will vibrate so that you are left with 2 seconds to place the hand over the dial for the transformation. Everything is extremely well thought out.

6 – What is the maximum wireless distance?

7 – How does the magician knows that the watch hands moved into position?

The remote vibrates giving the magician feedback. This is the beauty of this creation and why this effect is reliable. There is always communication and feedback from and to the watch and the remote.

8 – Can the magician perform other effects than predicting time?

Yes! Take a look at the ACAAN performance. It really is a great and original routine. Or the Objects Routine where the hands are pointing to any selected object.

9 – If I order two watches will the remotes communicate with both watches?

No. Each watch we sell is individually programmed meaning that only one remote works with one watch. We did this to prevent issues if there is in the area more than one magician performing the same effect.