BY JUAN ALVAREZ George Iglesias is proud to present the new Social Print routine by Juan Alvarez designed for virtual and live shows! It’s more than a trick. This is a full routine created for the amateur or professional magician. During the past 10 years, Juan Alvarez from Colombia, has been presenting Social Print with… 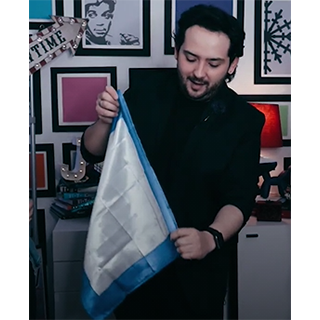 George Iglesias is proud to present the new Social Print routine by Juan Alvarez designed for virtual and live shows!

It’s more than a trick. This is a full routine created for the amateur or professional magician. During the past 10 years, Juan Alvarez from Colombia, has been presenting Social Print with great success in-person, on television and recently through Zoom virtual shows. This routine easily adapts to any situation and is themed around social media. Packed with entertaining moments, it’s a proven worker that’s very easy to do.

Inspired by the trick “Silk,” by Lewis Davenport, Juan has reshaped everything, created a full script and audience tested the routine hundreds of times. You will receive everything you need to perform: A card box, 26 specially printed cards, two custom-printed silks, a Facebook hand accessory, and even Juan’s script. Of course, you are more than welcome to create your own routines, gags and lines!

No! This is the last piece of technology created by the human being, it is actually a very thin and foldable LED screen, capable of printing your thoughts. You display a silk, it is printed blue and white in the center spot, and the magician and spectators have a conversation like this:

Then the handkerchief is folded in half many times until it is very small. A rubber band is shown and you say…

The rubber band is placed around the silk and this is held by the spectator in his hand or it could be put inside of a glass in full view. If you are doing virtual shows.

Now you show a box of jumbo cards with a FB logo on it. Removing the cards, you show they are printed with photos of celebrities: Will Smith, Lady Gaga, Leonardo DiCaprio, Angelina Jolie, Kim Kardashian, Elon Musk, Whoopi Goldberg, George Clooney, and many more!

You invite your audience to play along as you state a celebrity’s first name and getting them to guess the last name. For example: “George” and the audience says “Clooney”!

Then you show another card as you say, “Lady” The audience answers “Gaga”.

Then you say “Leonardo” and audience answers “DiCaprio” you can now throw a gag pointing to someone on the audience or screen saying “Who said DaVinci?”

And so on with others! (You even receive a blank card so you can put your own picture in the famous list or the picture of any other famous you want to add or do a switch that is explained in the video explanation)

So, the audience gets to see many different famous people. Now you starting passing cards from top to bottom and ask someone to say stop any time. Alternatively, you could pass the cards, one by one and have them say “Stop” anywhere.

You can make comments now about the celebrity selected, come up with your own gags here.

The card now can remain in the spectator’s hand or if you are doing a virtual show, it can remain facing the camera over your table or on an easel in full view.

Now, the magician asks the spectator his or her name. He writes it on a Post-it note.

Now the magician takes out an envelope and give it to the spectator asking: (Not included, you provide your own envelope)

When open any funny message can be read out loud… “I love you!”, “See you at 5 pm!” “Whatsapp dude!” (You can customize any message you want)

And of course, you can also come up with more jokes about the mouse, USB port, pen drive, power supply, fake news, virus and much more.

Then the magician shows a Facebook “Thumbs Up” accessory and says…

Now the magician asks the spectator one last question…

Then the magician or the spectator, as desired, make some gestures of copying and pasting from the card to the silk.

Once the magic gestures have been made, the rubber band is taken off, the silk is displayed and amazingly the selected celebrity is now printed on the handkerchief in high resolution.

The possibilities are endless! You get a complete routine that includes everything you need to perform Social Print.