By Craig Petty The Split Coin is one of the most under explored gimmicks in magic. It goes under several names such as Clone Coin, Super Coin and Johnny Wong’s Split Coin each version being as clever as the next. On this DVD Craig Petty reveals 11 killer routines which are only possible with the… 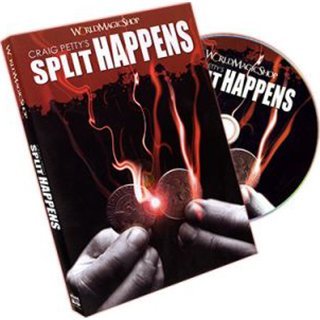 The Split Coin is one of the most under explored gimmicks in magic. It goes under several names such as Clone Coin, Super Coin and Johnny Wong’s Split Coin each version being as clever as the next. On this DVD Craig Petty reveals 11 killer routines which are only possible with the Split Coin gimmick. As a special bonus Craig has been given permission to perform and explain Johnny Wong’s brilliant ‘Coin Through Bill’. Join Craig Petty and master magician David Penn has they discuss the Split Coin and all its applications.

Throw Coins Across – One of the cleanest coins across routines ever! Four coins travel from hand to hand one by one until inexplicably all four coins have gone across.

Mexican Split – This is the perfect coin routine for walk around conditions. Three coins are produced and examined. They then travel from one hand to the other and finally vanish into nothing. Pure Magic!

Hopping Split – Hopping Halves is a classic of magic performed by magicians worldwide. This is Craig’s handling of this classic routine using the split coin gimmick. All you need is the split coin and you are good to go – no shells to worry about and an instant reset as well. As a bonus the performance includes the side splittingly funny World Magic Shop presentation.

ESimPossible 2 – One of the most baffling mentalism routines you will ever see, this is a killer version of Al Koran’s ‘Medallion’ routine with nothing more than a Split Coin, a notepad and a shot glass.

Hanging Split – A killer Hanging Coins routine with a kicker ending that will leave your audiences speechless.

Breakthrough – This routine has been described by many top professionals as the ultimate coins through table. Three coins are shown and then one by one pushed though the table. The spectator decides where the coin penetrates and the hands are shown empty after every penetration. As a finale the three coins are pushed up through the table all at the same time.

Sponge – This is the ultimate transposition routine that has to be seen to be believed. It also has an ending which is as strong as a jumbo coin production. A coin and a sponge ball change places over and over again. Finally, the ball and coin are placed together and fused into a metal ball.

Printing – A slow motion production of a coin and subsequent vanish, this one is a worker. First the inside of the coin is produced followed by the outside of the coin. This is one you will use.

Johnny Wong’s Coin Through Bill – The routine that started it all. A slow motion penetration of a coin through a spectator’s borrowed bill. Best of all, it’s really easy!