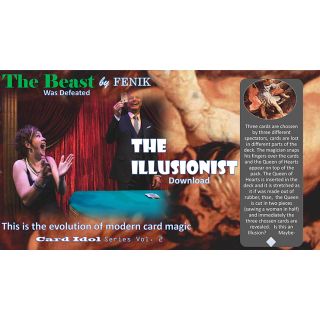 Three cards are chosen by three different spectators, and the cards are lost in different parts of the deck. The magician snaps his fingers over the cards and the Queen of Hearts appears on top of the pack. The Queen of Hearts is inserted in the deck and it is stretched as it if were made out of rubber! Then, the Queen is cut into two pieces (Sawing a Woman in Half). Immediately, the three chosen cards are revealed. Is this an Illusion? Maybe.