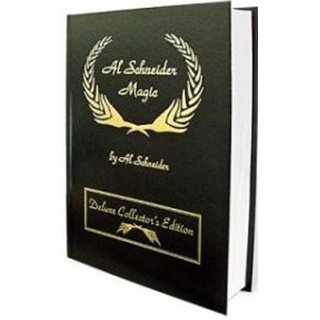 The deluxe version of Al Schneider Magic is a beautiful volume that matches previous collector’s editions from L&L Publishing, featuring gold-foil stamping, special matching end papers, and a different binding than the regular edition and each is individually signed and numbered by Al Schneider.

The special collector’s edition of Al Schneider Magic is strictly limited to 100 numbered copies to be sold.

In the world of magic literature, where there’s an overabundance of the ordinary, every so often, a book comes along that clearly stands out from the rehashed and recycled norm. A book that, even on casual perusal, demands to be studied for a lifetime. A book that represents the life’s work of one of magic’s most gifted artists. It’s a rare occurrence when a magic book of such high caliber is produced, but at long last, the wait is over. It’s time for Al Schneider Magic.

Al Schneider’s place in magic history would be secure if the now-classic “Matrix” effect was all he ever created but, as it turns out, “Matrix” was merely the tip of the iceberg. Al Schneider has devoted his life to not only creating great magic but in uncovering exactly what it is that makes magic effective for audiences and it’s that analytical approach to creating powerful magic that informs all of the effects taught in this landmark work. Al Schneider Magic secures his reputation as not only one of magic’s great creators but also as one of its great theoreticians.

There are tricks with coins, cards, cups and balls, napkins, bracelets, finger rings, and more. One could easily build a complete close-up act from the material presented here. And, if you think you know what “Matrix” is all about, wait until you read the comprehensive treatment of the effect that you’ll find in this book, including a discussion about its complete history, the philosophy of the effect, its many variations, and more…and all from its creator.

In a day and age when single-trick DVDs can cost $30.00 or more, you’ll find more magical value in this book than perhaps any other single investment you’ve ever made in magic. It may be that Al Schneider said it best. When asked to summarize the value he believed Al Schneider Magic held, he simply said, “You are guaranteed to get something from this book that you will use for the rest of your life. What is that worth?”