This new book – compiled and edited by Martin Breese – gathers together all of Al Koran’s magazine articles from the magic Wand, the Gen, the Wizard and Pentagram. It also features virtually all of the commercial effects that Al released via the Unique Magic Studio in London. Included as well are the effects that… 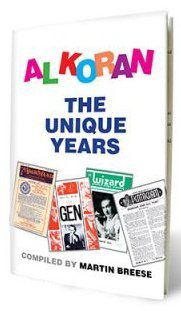 This new book – compiled and edited by Martin Breese – gathers together all of Al Koran’s magazine articles from the magic Wand, the Gen, the Wizard and Pentagram. It also features virtually all of the commercial effects that Al released via the Unique Magic Studio in London. Included as well are the effects that Al released himself whilst living in the USA.

The book includes a great introduction and article about Al Koran by the amazing mentalist Peter Zenner. Al Koran – The Unique Years is illustrated throughout by Phil Shaw and has a fantastic dust jacket designed by Paul Griffin.

Here are a few comments:

Richard Kaufman: “The name of Al Koran is still legendary many years after his death and this book will tell you why.”

Steve Shufton: “Al Koran’s influence continues to thrive in the magic and mentalist communities. What an extreme pleasure I had in reading this, the latest Al Koran work released by Martin Breese. These are lessons from the master, well worth devouring. The book is formatted beautifully – as one would expect from Martin Breese, and has taken its rightful spot – next to the other Koran books from Breese – but not until I read it again.”

Larry Becker: “This is an absolute must for Al Koran fans and gathers together his magazine contributions and commercially-released effects – all in one book.”

Peter Zenner: “I was very pleased to be able to contribute to and be involved in such a worthwhile book.”

Nick Lewin: “A great new book! For many years, the two classic Koran books were the chief source of information for those of us who were trying to learn the secrets of the master. Wonderful information, advice and routines were contained in those two slim volumes. They are still valuable and beloved residents in my bookshelf.

Recently my friend Martin Breese has done a wonderful job in updating the available reading matter on this iconic performer and magical innovator. Breese must be really thanked by the magic community for his recent additions to our knowledge and understanding of Al Koran. He has added another classic book to the available treasure trove.

I have found it to be a particularly fascinating volume. It gathers some rather obscure and extremely interesting material and turned it into a must-read book for fans of Koran. In fact, even if you have never had any interest in Al Koran because of his identification with mindreading, buy the book anyway-you may be in for a surprise. Don’t forget Koran was the man who created the basis and framework for Ring Flight! Before he became an almost instant star as a mentalist, Koran was a very sophisticated and accomplished sleight of hand/close-up performer.

This book collects routines and effects that have previously only seen the light of day in magazines. What they really demonstrate is what a powerful tunnel vision Koran had for the structure and subtleties that can create a miracle. His ability to simplify an effect and maximize its impact reminds me of a diamond cutter taking something precious and transforming it into something as close to perfection as possible. One entire section of the book contains many of the commercial effects that Koran released under the auspices of Harry Stanley’s Unique Magic Studio in London. A great deal of scholarly work went into patching these various instructions and manuscripts into a form suitable for release as a stand-alone book. The final section of the book details two routines that Koran released, after his relocation to America in 1969.

I really enjoyed the highly personal and fact filled introduction to the book by Peter Zenner, which does much to fill in the personal legacy of this remarkable man. It goes a long way in revealing the real ‘taste’ of the man born Edward Charles Doe, who carved out a unique spot for himself under a new name. Did you know Koran performed a magical/musical act entitled ‘Song & Sorcery?’ I didn’t; and I found this a fascinating piece of information, especially given the reason why.

Since receiving the manuscript I have taken the time to learn and perform several of the routines from this book and can report that they are pure gold. This collection has released great new/old material and is a true cause for joy for the performing magician.” (Nick Lewin)

Illustrated with line drawing and black and white photographs.