﻿ BY BY NOX & LUIS ZAVALETA Inspired in the classic of magic called homing card, Luis Zavaleta and magician NOX come with this great effect for kids! A very funny and interactive routine… Very easy to do Excellent quality A seven minute solid comedy routine A perfect souvenir to give at your kids shows… 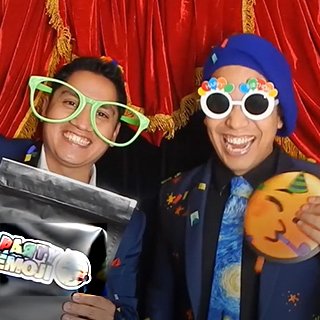 BY BY NOX & LUIS ZAVALETA

Inspired in the classic of magic called homing card, Luis Zavaleta and magician NOX come with this great effect for kids!

A very funny and interactive routine…

The magician says “Now, let me show you this 2 happy faces”, the first is a happy face but the last is a sick face… The magician removes it when he (or she) discovers that the kids are laughing and pointing to that face… finally the magician says, well, I have one smiley emoji, and when the kids look at it they freaks out because is a crying emoji… when the magician looks at it and realizes that this is the only emoji and he (or she) has no more left, decides to ask the kids if they could do magic to transform that crying face into a happy face… when the kids say the magic words something awesome happens: the tears begin to slowly disappear…. the magician congratulate the children but the face is still sad… so the magician takes a pair of eyes , sticks it into the chin’s face, turns it face down and shows the apparently happy face… the kids begin to laugh out loud and then, when they think it was impossible to change that face, it transforms into a party emoji!. Finally, the magician takes a marker and signs that party face to give to the birthday kid as a great souvenir.