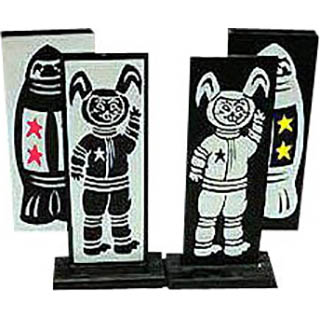 Both rocket ships are opened to show their passenger, which is a cute BUNNY-NAUT, that’s a bunny dressed in a space suit, a black one and a white one. The children are told that both bunnies are going to be sent into space. Both bunnies are put back into the space ships, and you and the kids count backwards from ten just like they do at Cape Kennedy, in Florida.

The white bunny is picked up and turned upside down as you say, “All right I’ll turn him around!” All the ‘turn around’ gags are done when finally you say to your audience, “This bunny really didn’t go to space.” “He chickened out and turned YELLOW.” As you say this you turn the BUNNY-NAUT around to show that he is indeed yellow. The other BUNNY-NAUT is also turned around. While doing this you tell the kids, “This BUNNY-NAUT went into space but his face turned RED from embarrassment because he forgot his underwear.” Of course when the BUNNY-NAUT is turned around he is a bright RED.

This effect is made from the finest birch woods and tempered hardwood for durability. All the rockets and BUNNY-NAUTS are beautifully silk-screened. Both rockets stand 12 inches high and will be seen by all in the audience.

We are very proud to introduce this children’s effect.