A TRIP TO THE CIRCUS

BY GEORGE IGLESSIAS Inspired by Master Magician Mr. David Copperfield and the classic Abbotts’s Bathing Beauty effect, originally created by Frederic Culpit from England. George Iglesias brings us now his kids version, after the success of the launching of “A Trip to Cancun” the adult version. Now George bring us this version for children, a…

Home > KID'S MAGIC > A TRIP TO THE CIRCUS 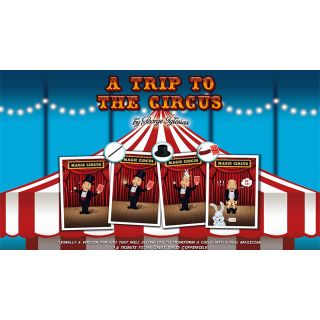 A TRIP TO THE CIRCUS

Inspired by Master Magician Mr. David Copperfield and the classic Abbotts’s Bathing Beauty effect, originally created by Frederic Culpit from England. George Iglesias brings us now his kids version, after the success of the launching of “A Trip to Cancun” the adult version. Now George bring us this version for children, a seven minute solid comedy routine that has a great twist and plot that is ready to entertain audiences of all kinds!

The magician selects a kid from the audience and shows him 6 cards with circus animals printed on them. Now the kid will freely select one card, memorize the animal selected and show it to everybody else, but the magician. The card is now returned to the package and shuffled in between the other cards. Now the magician announces that he will make his animal vanish and travel to a Magic Circus, he waves his hand over the pack of cards and either the kid or the magician can display the cards to find the animal selected has disappeared completely!

The magician says now that he is going to bring the kid to that Magic Circus by using his imagination. A big poster is shown now with the figure of a classic magician, wearing a tuxedo, a red bow tie, a red cummerbund, a magician’s top hat and a magic wand, but most importantly he is actually holding a card in his other hand. The problem is that the card is an actual drawing on the poster and the back is facing up, so there is no way to see if the card really traveled to the Magic Circus.

No worries, the magician now folds the poster and asks the kid to insert his hand inside to take out the card, but the kid will remove instead the magician’s magic wand!

Now the poster is open and the drawing is missing also the TOP HAT and the kids can see the the magician was hiding a bunny on top of his head and that he is also bald! All the kids will be laughing at the situation of the kid taking other things instead of the card, so the magician prefers to insert his hand this time, but he ended up doing the same as the kid, since he takes out one card facing back, but by mistake he also takes with it a red cummerbund (waistband) without noticing it.

The kids will now laugh even more and immediately inform the magician of what’s going on, so as soon as the magician sees his mistake, he puts the red cummerbund aside and asks the kid to name the animal he selected…

As soon as the animal is named, he turns the card facing forward to discover it is exactly the same animal and card that was selected!

At the end of the trick all the kids will ask to see inside of the poster, when the magician displays the poster open again they can clearly see that the magician’s pants are down. He is wearing funny underwear and a bunny in front of the poster. The kids will be laughing at this comic situation.

Comes with everything you need…