BY JEFF NOLASCO Perfect cut Gimmick Deck is an incredible visual effect that spectator’s will love. EFFECT… The magician takes 2 decks. One red deck, one blue deck. Spread the red deck to the spectator so they know it is a normal deck. Shuffle the red deck and set it aside. Spread the blue deck,… 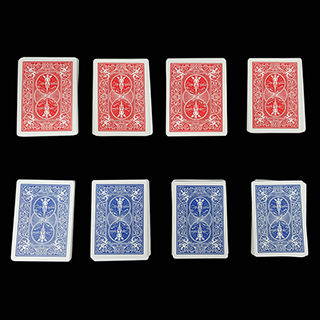 Perfect cut Gimmick Deck is an incredible visual effect that spectator’s will love.

The magician puts a single red card face down on each of the spectator’s blue cards and moves the rest of the red cards to the side.

Miraculously when the magician turns over the red card and then the top blue card… both cards are the same!

The number AND the suit match perfectly on EVERY one of the 4 piles!