CHROME KINGS – The most VIRAL Custom Playing Card Deck of modern times just got a Luxury MASTER SERIES LIMITED EDITION with a HOLO FOIL BOX! The original AMAZING Chrome Kings deck designed in unbelievable detail in digital 3D and went on to internet stardom thanks to Dude Perfect and Rick Smith Jr.. Their incredible… 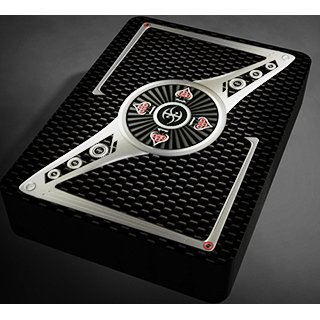 The original AMAZING Chrome Kings deck designed in unbelievable detail in digital 3D and went on to internet stardom thanks to Dude Perfect and Rick Smith Jr.. Their incredible viral card throwing trick shots video has over 140 million views on YouTube. Chrome Kings was designed with high visibility and the finest stock and finishes in the world making it perfect for card throwing, magic tricks, cardistry, XCM, and Poker.

There’s nothing this deck can’t do! Get this amazing MASTER SERIES version of Chrome Kings today!

This new Master Series “Carbon” version of Chrome Kings features a carbon fiber like pattern printed on the back design and has an incredible holo foil embossed luxury box that has to be seen in real life to appreciate! The faces feature De’vo’s original incredible 3D artwork which took hundreds of hours to complete!

The Chrome Kings Playing Cards Project has long been a dream of underground playing card legend De’vo vom Schattenreich. As a world renowned card expert, producer and art director, De’vo has produced over 50 of the world’s finest playing cards. De’vo’s playing cards have appeared on television including Stan Lee’s Super Humans television show! De’vo’s cards are in the homes of celebrities and Hollywood superstars and used by magicians, card players and card artists around the world. Some of his decks sell out in just minutes after release. Several years ago, De’vo had an idea to create a complete deck of playing cards in complete 3D environments and wanted to create this on his own, without help from any other artists. De’vo began the long journey and finally his very first work of art which propelled his career as a playing card artist. Each and every Court card is its own fully detailed 3D model that was built from scratch, then textured, lit and photographed for each card.

The photographs taken of each model are then printed on playing cards by the USPC with the world’s best stocks and finishes and is made in USA!