The secrets of Pendragon’s regal mysteries, featuring explanations of his famed Metamorphosis and more.  125 pages Interviews with Jonathan Pendragon about magic and showmanship In-depth explanations of his Metamorphosis, Sword Basket, Broom Suspension, and other classics Conversations on stagecraft, movement, and directors Discussions of De Kolta, Maskelyne, Robert-Houdin, Soo, and Houdini Jonathan’s analyses of his… 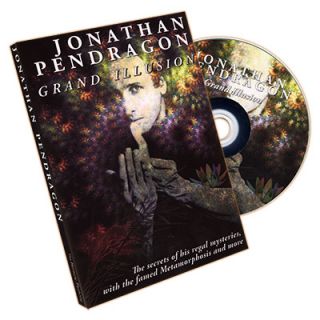 The secrets of Pendragon’s regal mysteries, featuring explanations of his famed Metamorphosis and more.

Jonathan Pendragon has just authorized Todd Karr to release these transcribed interviews to the magic public. Created for a planned book on illusion work, these conversations focus on the detailed workings of Jonathan’s best illusions and his views on magic, including not only methods but also many of the small presentational nuances that made him one of the world’s most dynamic performers.

Our Grand Illusion CD collects these interviews in PDF form, ready to read, enjoy, and study. You’ll learn the precise methods for many of his most famous illusions, including the Metamorphosis, Sword Basket, and Broom Suspension, as well as brilliant mysteries like his 360 Levitation, the Sword of Damocles, Things That Go Bump in the Night, Bullet Catch, Million Dollar Mystery, Himber Ring, and more.

The discussions also include Jonathan’s fascinating views on Robert-Houdin, De Kolta, Maskelyne, Soo, Houdini, and Selbit; conversations about stagecraft and direction; and innumerable nuances and tips for the professional performer.

Grand Illusion brings you some of the most insightful knowledge ever offered to the magic community. Because of the valuable nature of these secrets, we have priced it for the professional, who will find thousands of dollars of value in its lessons, secrets, and insights.