“I thought CDs were out as a way of learning about magic, but this one by Anthony Owen proves I was wrong. You just have to hear him speak to get the full inspirational effect of his amazing story. This is someone who consciously turned himself into a success, and I really enjoyed hearing him… 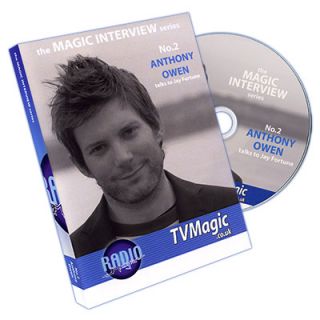 “I thought CDs were out as a way of learning about magic, but this one by Anthony Owen proves I was wrong. You just have to hear him speak to get the full inspirational effect of his amazing story. This is someone who consciously turned himself into a success, and I really enjoyed hearing him explain just how he did it. When he gives advice, Anthony is stimulating, exhilarating and motivating. But, above all, he is right!” Geoffrey Durham, star of TV’s The Best of Magic and Countdown.

“There are, maybe half a dozen people in the world who understand how to give magic on television the impact it has live. Anthony Owen is one of them. He has a mind of extreme subtlety and immense experience. He understands and loves both the TV medium and the art of magic with a joyful enthusiasm that is inspiring to encounter. If you have the good fortune to be able to work with him, do.” Teller , one half of ‘the bad boys of magic’ Penn and Teller.

“Do you know what it takes to be a star in the world of magic? Anthony Owen knows, and he can teach you the inner secrets of creating successful media magic! Anthony has an incredible track record of producing great television magic. The list of magicians he’s worked with reads like a who’s who of modern magic: everyone from Paul Daniels to Derren Brown and Juan Tamariz to Penn and Teller – and I’ve been fortunate to work with him on a couple of his projects too!” Jeff McBride, international award winning magician.

Anthony Owen is widely acknowledged as one of the UK’s most prolific and influential magical creators, producers and writers. As a performer he has appeared on over 100 UK television programmes and on the stages of theatres in London, New York, Las Vegas and around the world. His original magical effects, routines and ideas have been featured by other magicians worldwide and he has acted as a magic consultant for numerous performers and theatre, film and television productions. He is also the BAFTA and Rose D’or award-winning producer of over one hundred hours of television magic shows.

On this CD, Anthony discusses his magical career to date, offering his expertise for the serious magician who aspires to raise their profile through the medium of TV. It’s also a must listen for any magicians who are thinking of filming themselves for promotional purposes, for a magic instructional video or to share their performances on Youtube, Myspace or any other similar sites.

Part One: The Magician

Anthony talks about his interest in magic, when he was first ‘bitten by the bug’, and how magic became an obsession for him.

Anthony discusses the shows he has worked on and his career change from consultant to producer.

Anthony’s top tips to help you become a TV magician! These are the REAL things he looks for when seeking new talent.

Finally, Anthony reveals a new trick which has never been published. He explains the effect and gives ideas for a method, but urges YOU to create a routine and let him know your results! An exercise in creativity.

Anthony Owen’s motivational talk with Jay Fortune captures the passion, ambition and obsession of one of magic’s most influential thinkers and creators. Can you afford to not own a copy?