BY DE’VO VOM SCHATTENREICH AND HANDLORDZ The follow up to the 2017 Cardistry Deck of The Year is HERE! WTF Cardistry 2 Spelling Deck not only transforms visuals, it can also spell any word!!! The INSANE WTF Cardistry deck has taken the world by storm – the original went on to win several awards to… 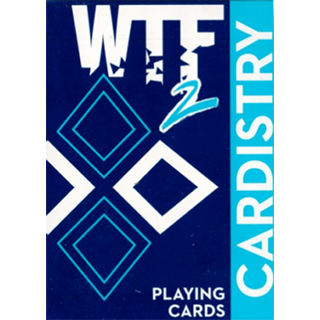 The follow up to the 2017 Cardistry Deck of The Year is HERE! WTF Cardistry 2 Spelling Deck not only transforms visuals, it can also spell any word!!!

The INSANE WTF Cardistry deck has taken the world by storm – the original went on to win several awards to include The United Cardists Deck of the Year Awards in the “Best Deck for Fanning” category, and on most card collectors’ top 10 lists! WTF is the only deck in the world that can be a white deck, a dark deck, and can spell any word! This deck is so crazy that it makes you scream WTF when you see it in action! WTF allows you to weave the letters into the deck and fan them. You can spell anything in what looks like a normal fan and is such a great visual for people who want to spell words while standing up and without needing a table to spread the cards.

WTF Cardistry 2 Spelling Deck is the sequel, and we have made some amazing changes! First, we added color to this already amazing deck to make the fans pop and become alive with visual color. We made the pips/numbers closer to the edges to allow more room for the letters to be moved over for easier spelling and less overlap. Check out all the different fans that can be done with this deck while keeping the letter hidden with the aid of special “cover” cards. For WTF Cardistry 2 Spelling, we took out just one set of the four least used letters in the alphabet – Z, Q, X and J – and replaced these 4 cards with 8 different symbols/words to make spelling easier. These small additions make communicating your message faster and more visual! If you ever want additional letters or symbols, you can combine decks. All cards except the symbol/word cards can be reversed so you can choose the colors. You can use colors as capitals, punctuation, or to spell words inside of words.

Magicians – this is a MUST HAVE! Imagine the possibilities and you can do reveals standing up in fans!

*Note – all images are 3D renderings only, actual product may differ. Artwork by Jay Peteranetz and De’vo vom Schattenreich.


Also, be sure to pick up the companion deck, Cardistry Switch, which shares the same back design giving you ENDLESS possibilities! These are LIMITED EDITION, so be sure to get several today!